Technically Speaking: The Difference Between A Bull & Bear Market

Interestingly, while there are some “rules of thumb” for falling prices such as:

There are no such definitions for rising prices.

It’s all a bit arbitrary and rather pointless.

As investors, it is important to understand what a “bull” or “bear” market actually is.

Here is another extremely important definition for you.

Investing is the process of placing “savings” at “risk” with the expectation of a future return greater than the rate of inflation over a given time frame.

Investing is NOT about beating some random benchmark index which requires taking on an excessive amount of capital risk to achieve. Rather, our goal should be to grow our hard earned savings at a rate sufficient to protect the purchasing power of those savings in the future as “safely” as possible.

As pension funds have found out, counting on 7% annualized returns to make up for a shortfall in savings leaves individuals in a vastly underfunded retirement situation. Making up lost savings is not the same as increasing savings towards a future required goal.

Nonetheless, when it comes to investing, Bob Farrell’s Rule #10 is the most relevant:

Of this, there is no argument.

However, understanding not only the difference between a “bull” and “bear” market, but when a change is occurring, is critical to capital preservation and appreciation.

So, what really defines a “bull” versus a “bear” market. Bull and bear markets are obvious with the benefit of hindsight.

The problem, for individuals, always comes back to “psychology” with respect to our investing practices. During rising, or “bullish,” markets, the psychology of “greed” not only keeps individuals invested longer than they should be but also entices them into taking on substantially more risk than they realize. “Bearish,” or declining, markets do exactly the opposite as “fear” overtakes the investment process.

Most importantly, it is difficult to know “when” the markets have changed from bullish to bearish. Over the last decade, there have been several large corrections which have certainly looked like the beginning of a turn from a “bull” to a “bear” market. Yet, after a short-term corrective process, the upward trend of the market resumed.

So, while it is obvious that missing a bear market is incredibly important to long-term investing success, it is impossible to know when the markets have changed.

The next couple of charts will simply build off of the weekly chart above.

“In the short run, the market is a voting machine but in the long run it is a weighing machine” – Benjamin Graham

In the short-term, which is from a few weeks to a couple of years, the market is simply a “voting machine” as investors scramble to chase what is “popular” as prices rise; or “panic sell” everything when prices fall. But these are just the wiggles along the longer-term path.

In the long-term, the markets “weigh” the substance of the underlying cash flows and value. During bull market trends, investors become overly optimistic about the future bid up prices beyond the reasonable aspects of the underlying value. The opposite is also true, as “nothing has value,” during bear markets. This is why markets “trend” over time as excesses in valuations, in both directions, are reverted to, and beyond, the long-term means. 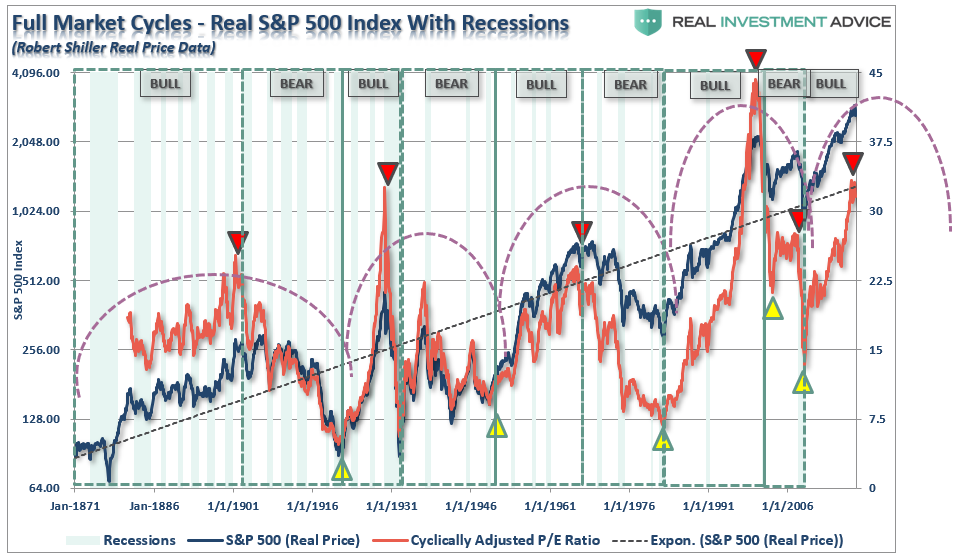 While the long-term picture is quite clear, valuations still don’t do much in terms of telling us “when” the change is occurring.

Change Starts Slowly, Then All At Once

“Tops are a process and bottoms are an event” – Doug Kass

Last week, I discussed the change to the markets overall attitude. In the last decade, there have been two occasions where the long-term moving average was violated but did not lead to a longer-term change in the trend.

Had it not been for these artificial influences, it is highly likely the markets would have experienced deeper corrections than what occurred.

Today, Central Banks globally are ending their monetary injection programs, rates are rising, and the surge in global economic growth is fading. With stock valuations at historically extreme levels, the value being ascribed to future earnings growth is being revised lower as interest rates rise.

As I have written previously, prices can only move so far in one direction before the laws of physics take over. To wit” For only the third time in the last decade, the market has now slipped below that longer-term trend.

The difference, this time, is there are no Central Banks talking about coming to the markets rescue – at least not yet.

Currently, it is still too early to know for sure whether this is just a “correction” or a “change in the trend” of the market. As I noted previously, there are substantial differences which suggest a more cautious outlook. To wit:

Here is the important point.

Understanding that a change is occurring, and reacting to it, is what is important. The reason so many investors “get trapped” in bear markets is that by the time they realize what is happening, it has been far too late to do anything about it.

Sure, this time could be different. However, as Ben Graham stated back in 1959:

“‘The more it changes, the more it’s the same thing.’ I have always thought this motto applied to the stock market better than anywhere else. Now the really important part of the proverb is the phrase, ‘the more it changes.’

The economic world has changed radically and will change even more. Most people think now that the essential nature of the stock market has been undergoing a corresponding change. But if my cliché is sound,  then the stock market will continue to be essentially what it always was in the past, a place where a big bull market is inevitably followed by a big bear market.

In other words, a place where today’s free lunches are paid for doubly tomorrow. In the light of recent experience, I think the present level of the stock market is an extremely dangerous one.”

He is right, of course, things are little different now than they were then.

Pay attention to the market. There action this year is very reminiscent of previous market topping processes. Tops are hard to identify during the process as “change happens slowly.” The mainstream media, economists, and Wall Street will dismiss pickup in volatility as simply a corrective process. But when the topping process completes, it will seem as if the change occurred “all at once.”

The same media which told you “not to worry,” will now tell you “no one could have seen it coming.”

The market may be telling you something important, if you will only listen.