Technically Speaking: Is Everything “Priced In?”

Is everything “priced in?” Investors have gone “all in” with a disregard for caution. But with markets extended and overvalued what should investors do now?

As discussed in this past weekend’s newsletter, investors got even more speculative during the recent correction, which is the opposite of what you would expect. But if markets anticipate “good news,” then are there any “surprises” left?

In other words, if markets have priced in perfection, then there is not a lot of room for “disappointment.” Such was a point I made this morning on Twitter:

Lot's of room for a bigger #correction at some point with #shortinterest at multi-year lows. All you need is some unexpected, exogenous event to trigger algos to reverse course. pic.twitter.com/OOXEvaNvzj

As we have discussed previously, “market momentum” is a hard thing to kill. Such is particularly the case when the “Fear Of Missing Out” overrides logic. In this past weekend’s missive, we laid out the case for a “sellable rally.” To wit:

“You can see the failure of the market at the 20-dma and the support at the 50-dma. What is essential are the upper and lower indicators. Lot’s Of Risks To The Bullish Outlook

While we used the sell-off to add some holdings to our portfolios, we remain cautious for several reasons.

The problem, as discussed in “Insanely Stupid,” the ability for stocks to continue to grow earnings at a rate to support such high valuations is problematic. Such is due to rising debts and deficits, which will retard economic growth in the future. To wit:

“Before the ‘Financial Crisis,’ the economy had a linear growth trend of real GDP of 3.2%. Following the 2008 recession, the growth rate dropped to the exponential growth trend of roughly 2.2%. Instead of reducing the debt problems, unproductive debt, and leverage increased.

The ‘COVID-19’ crisis led to a debt surge to new highs. Such will result in a retardation of economic growth to 1.5% or less.” Slower economic growth, combined with a potential for higher taxes, increases the probability that “risk” may well outweigh “reward” at this juncture. However, all of these issues will take time to play out.

In the short-term, it’s all about sentiment.

Stocks can, and likely will, try and go higher in the near term. There is a tremendous amount of bullish sentiment in this regard. Options speculators have not been deterred by the recent sell-off and continue to “buy the dip.”

As noted in this past weekend's #newsletter, the recent #market #correction made #speculators even more speculative. https://t.co/PhtyIOhAdK pic.twitter.com/Z99KTYb4aD

Such is why, despite some likely wiggles along the way, our target of 3750 may still be viable because of momentum and extreme levels of “bullish bias.” 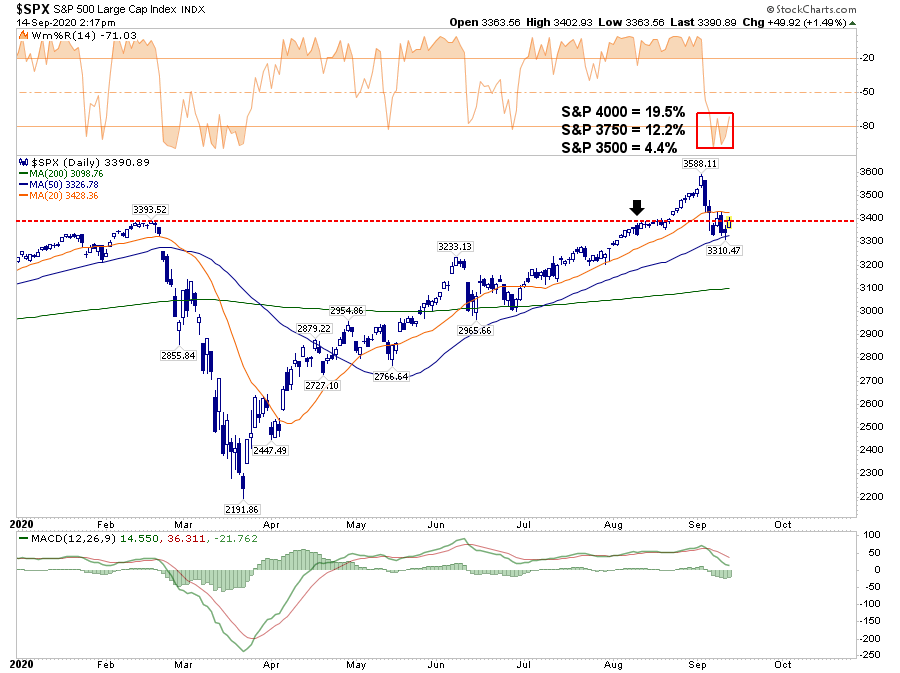 Since that time, the market did indeed rally to, and exceeded, our initial target of 3500. The subsequent pullback to the 50-dma held the bullish uptrend from April for now and did reverse the short-term overbought condition.

Also, as we showed our RIAPro Subscribers (30-Day Risk-Free Trial), the sharp sell-off in Technology specifically pulled the sector out of its Risk/Reward range, providing a “bullish setup.” 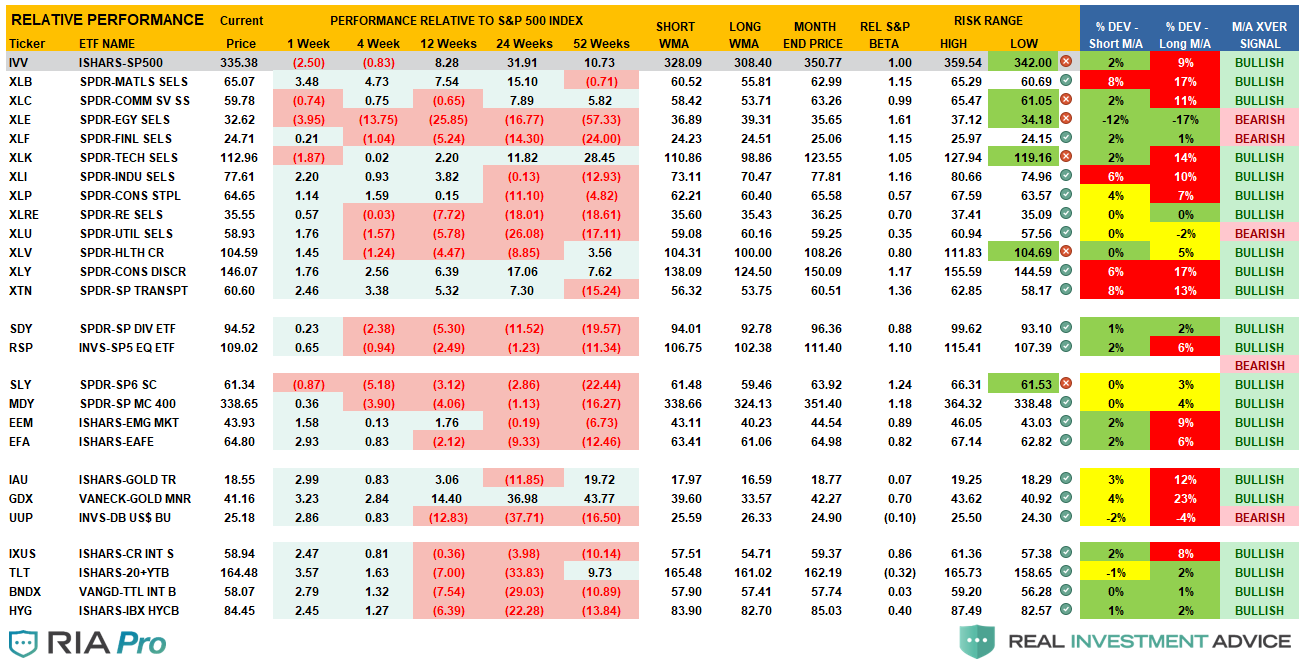 The reason we suggest selling any rally is because, until the pattern changes, the market  exhibiting all traits of a “topping process.”

We can show this in a long-term monthly chart. 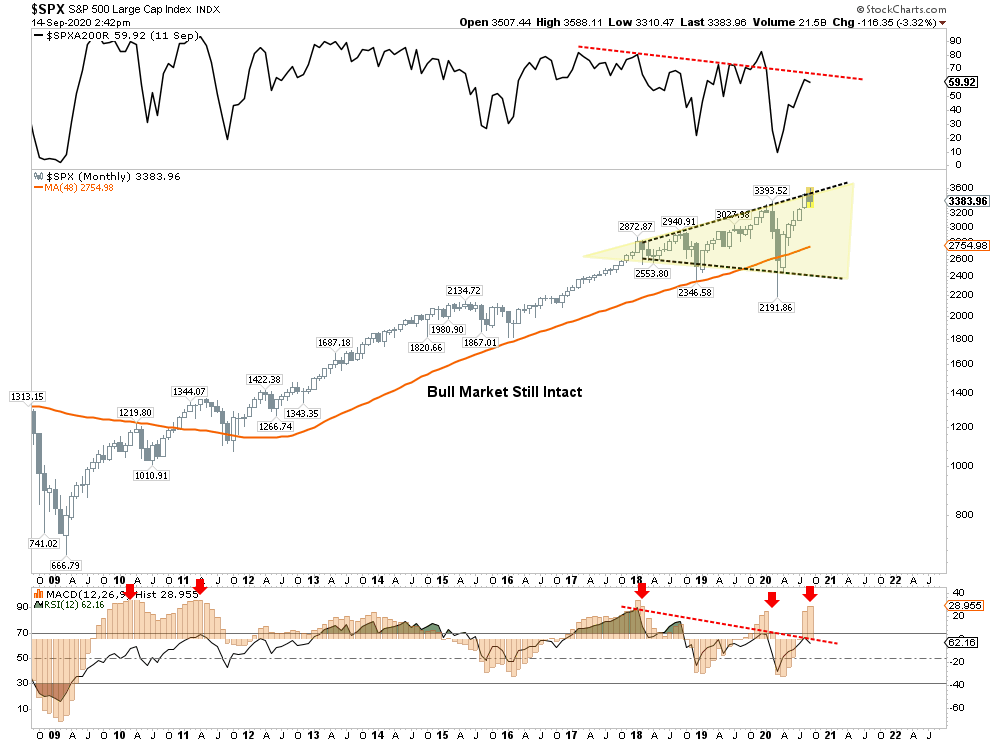 Note that since 2009, whenever the monthly MACD “buy signal” was this elevated, it typically correlated to a short- to intermediate-term market peak. At each point, the “bullish story” was the same.

However, the primary warning signs to investors were also the same:

Some Upside, But Downside

Indeed, and if it does, and our “onboarding” model turns back onto a “buy signal,” we will act accordingly and increase equity risk in portfolios. However, for now, the risk still appears to be to the downside. Overall, our assessment remains one of caution. In the short-term, we could well see an oversold bounce that could even recover back to the previous highs.

However, we suspect that given the rather numerous headwinds currently facing the markets, from the Fed to the election, that a failure at lower highs would not be surprising.

While we did add some exposure near the lows, we will be using the rally to sell into and increase our portfolio hedges heading into the election.

However, these are the questions we ask ourselves every time we add exposure to portfolios:

Ignoring the results and “hoping this time will be different” has never been a profitable portfolio strategy.

The post Technically Speaking: Is Everything “Priced In?” appeared first on RIA.