In this past weekend’s revised newsletter format, I noted the markets were due for an oversold rally. To wit:

“While technically there is a weekly confirmed sell-signal in place, the very oversold condition continues to suggest a short-term rally back to the top of the current trading range is likely.”

Yesterday, the markets surged out of the gate as buyers came in and it looked as if a tradeable rally was set to ensue. But such was not to be the case as by late afternoon the markets turned red.

The good news, if you want to call it that, was that the market did approach, and bounce off of, the March weekly closing lows. With the market now more deeply oversold than what was seen earlier this year, we still expect there to be a counter-trend rally in the next several days.

The bad news is that the target for that rally continues to decline. The target range has declined from 2800-2850 previously to just 2720-2750 currently. 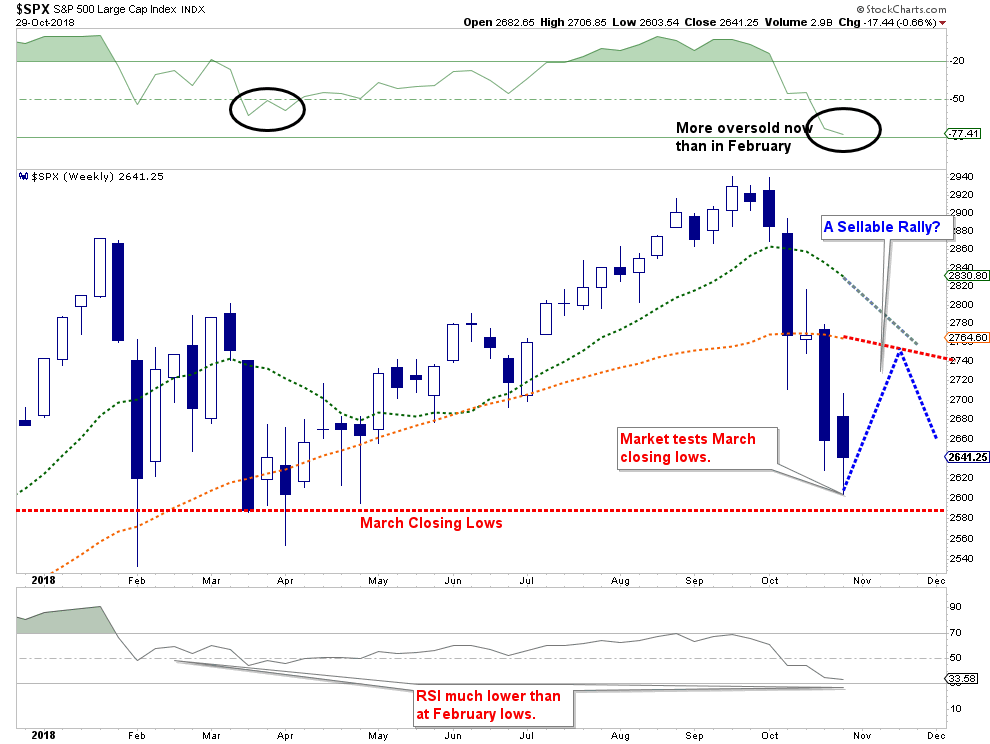 There are several reasons a rally is highly likely.

Sentiment has gotten much more negative as of late with fear/greed levels falling sharply as shown by the CNN Fear/Greed Index.

However, while “sentiment” has become much more fearful in the short-term, suggestive of a potential short-term bottom, investment positioning doesn’t show as equally of a fearful position. In other words, while investors are “fearful of a crash,” investors aren’t really changing their allocations much. The same goes for positioning by looking at the Rydex bullish funds to bearish funds ratios. While they have definitely reverted back to levels seen at the February lows, they are nowhere near the levels seen during the 2016 bottoms. The current psychological conditions suggest a short-term bottom in the markets are likely. However, given the level of “fear” relative to current positioning is not at levels seen during more lasting bottoms, it keeps us cautious on assuming the current sell-off has been completed.

While economic data remains robust over the last couple of quarters due to massive government spending for hurricanes, wildfires, and defense, much of that support has now worked its way through the economy. Higher interest rates are beginning to weigh on the economically important sectors of housing and autos.

As I wrote previously, the boost given to corporate earnings from tax cuts has, as expected, begun to fade starting this quarter.

“The market is digesting the fact that the tax cut last year has created a lower quality increase in US earnings growth that almost guarantees a peak rate of change by 3Q. Furthermore, the second-order effects of said tax cuts are not all positive.”

That has indeed been the case so far this earnings season as guidance has been littered with negative guidance, missed revenue expectations, concerns over rising costs of employment, and weaker than expected earnings growth on many fronts. Furthermore, the impact of tariffs has begun to weigh on companies who are changing forward expectations, CapEx spending plans, and other actions.

“In addition to concerns about economic growth, investors and managements have focused on margin pressures from rising wages and other input costs. FY2 EPS revision sentiment is negative for the first time since the passage of tax reform.”

However, the good news is that a huge number of companies will be exiting out of their “blackout period” for share repurchases.

“And while the market appears to be discounting still solid earnings, amid concerns of “peak profits”, one critical catalyst may prompt a substantial return of optimism this week: the return of buybacks.

As Kostin calculates, nearly half, or some 48% of S&P 500 firms are now out of their blackout windows and will be able to resume discretionary share repurchases.” “And as we have noted previously, from a demand-supply perspective, buybacks have been the main driver of the equity rally in this cycle. So in the absence of outflows and further positioning cuts, which would require incrementally more negative news at a time when much of the future adversity appears to be priced in, buybacks should – according to both Goldman and Deutsche Bank – finally drive equities higher.”

Of course, with ongoing trade wars, geopolitical escalations, and mid-term elections next week, there are plenty of events to create more negative news in the short-term.

From a purely technical perspective, the news is negative. As noted by Stocktrader’s Almanac last week:

Currently, the market is indeed grossly oversold enough on a short-term basis to provide fuel for a bounce as shown in the chart below.

There are several points to note. The combination of both extreme oversold and deviated conditions suggest that a bounce to reverse those conditions in the short-term is extremely likely.

The difference, however, is whether or not the market can climb back above the 50-dma? This is an important point for the future direction and trend of the market.

With the market below BOTH the 50- and 200-dma there is a very high probability that we could be witnessing an early change from the previous bullish trend to a more bearish trend in the months weeks and months ahead.

Importantly, if the market is able to reverse these more negative developments, then portfolio actions will change back from “selling rallies” to “buying dips.” However, for now, that is not the case.

One thing that we have noted repeatedly in our weekly missives ever since September is that after a strong summer advance, a pick up in volatility in October was likely. However, November begins the “seasonally strong” for the markets particularly as many major fund managers are lagging in performance this year and will be playing “catch up” into year end.

However, with that said, all important signals are currently registering “sell signals,” so we will need to see a reversal of these signals to warrant becoming more aggressive on the equity side of the ledger.

With the market extremely oversold in the short-term BUT with a confirmed “weekly sell signal” in place, I want to reiterate that portfolio management processes have now been switched from “buying dips” to “selling rallies” until the technical backdrop changes.

Therefore, use rallies to:

If the bulls are right, then it is a simple process to remove hedges and reallocate back to equity risk accordingly.

However, if the bull market has indeed ended for now, a more conservative stance in portfolios will protect capital in the short-term. The reduced volatility allows for a logical approach to make further adjustments as the correction becomes more apparent. (The goal is not to be forced into a “panic selling” situation.)

It also gives you the opportunity to buy at deeply discounted values.

For now, we continue to look for a “sellable rally.