The Problem With Wall Street’s Forecasts

Over the last few weeks, I have been asked repeatedly to publish my best guess as to where the market will wind up by the end of 2019.

The reality is that we can not predict the future. If it was actually possible, fortune tellers would all win the lottery.  They don’t, we can’t, and we aren’t going to try.

The biggest problem with Wall Street, both today and in the past, is the consistent disregard of the possibilities for unexpected, random events. In a 2010 study, by the McKinsey Group, they found that analysts have been persistently overly optimistic for 25 years. During the 25-year time frame, Wall Street analysts pegged earnings growth at 10-12% a year when in reality earnings grew at 6% which, as we have discussed in the past, is the growth rate of the economy.

Ed Yardeni published the two following charts which show that analysts are always overly optimistic in their estimates. This is why using forward earnings estimates as a valuation metric is so incredibly flawed – as the estimates are always overly optimistic roughly 33% on average.

Most importantly, the reason earnings only grew at 6% over the last 25 years is because the companies that make up the stock market are a reflection of real economic growth. Stocks cannot outgrow the economy in the long term…remember that.

The McKenzie study noted that on average “analyst’s forecasts have been almost 100% too high” which leads investors into making much more aggressive bets in the financial markets which has a general tendency of not working as well as planned.

However, since “optimism” is what sells products, it is not surprising, as we head into 2019, to see Wall Street once again optimistic about higher markets even after massively missing 2018’s outcome. But, that was so last year.

For 2019, analysts have outdone themselves on scrambling to post the most bullish of outcomes that I can remember. Analysts currently expect a median projected return of 23.66% from the 2018 close. No…seriously. This is what Wall Street is currently expecting despite the fact that foreign and domestic economic data is weakening, corporate profit growth is likely peaking, trade wars are heating up and the Federal Reserve is tightening monetary policy. As Greg Jensen, co-chief investment officer of Bridgewater Associates, the biggest hedge fund in the world, recently stated:

“The biggest theme developing is that you are going to have significantly weaker growth, near recession-level growth in 2019, based on our measures, and the markets are generally not pricing that in.

Although the movement has been in that direction, the degree of [ the market’s decline] is still small relative to what we are seeing in terms of the shifts in likely economic conditions.  2019 will be a year of weaker growth and central banks struggling to move from their current tightening stance to easing and finding it difficult to ease because they have very little ammunition to ease.”

All of this should sound very familiar if you have been reading our work over the past year.

The problem with the year-end “guesses” above is they are based on “forward operating earnings estimates” which is another set of severely flawed “WAG’s” on top of a “WAG.”

Secondly, operating earnings are cooked, baked, and fudged in more ways than you can imagine to win the “beat the estimate gaime.” The Wall Street Journal confirmed as much in a 2012 article entitled “Earnings Wizardry” which stated:

“If you believe a recent academic study, one out of five [20%] U.S. finance chiefs have been scrambling to fiddle with their companies’ earnings. Not Enron-style, fraudulent fiddles, mind you. More like clever—and legal—exploitations of accounting standards that ‘manage earnings to misrepresent [the company’s] economic performance,’ according to the study’s authors, Ilia Dichev and Shiva Rajgopal of Emory University and John Graham of Duke University. Lightly searing the books rather than cooking them, if you like.”

This should not come as a major surprise as it is a rather “open secret.” Companies manipulate bottom line earnings by utilizing “cookie-jar” reserves, heavy use of accruals, and other accounting gimmicks to either increase or depress, earnings. “The tricks are well-known: A difficult quarter can be made easier by releasing reserves set aside for a rainy day or recognizing revenues before sales are made, while a good quarter is often the time to hide a big ‘restructuring charge’ that would otherwise stand out like a sore thumb. What is more surprising though is CFOs’ belief that these practices leave a significant mark on companies’ reported profits and losses. When asked about the magnitude of the earnings misrepresentation, the study’s respondents said it was around 10% of earnings per share.”

Since company executives are highly compensated by rising stock prices, it should not be surprising to see 93% of the respondents pointing to “influence on stock price” and “outside pressure” as reasons for manipulating earnings.

This was brought to the fore in 2015 by the Associated Press in: “Experts Worry That Phony Numbers Are Misleading Investors:”

“Those record profits that companies are reporting may not be all they’re cracked up to be.

As the stock market climbs ever higher, professional investors are warning that companies are presenting misleading versions of their results that ignore a wide variety of normal costs of running a business to make it seem like they’re doing better than they really are.

What’s worse, the financial analysts who are supposed to fight corporate spin are often playing along. Instead of challenging the companies, they’re largely passing along the rosy numbers in reports recommending stocks to investors.“

Here were the key findings of the report:

These “gimmicks” to boost earnings, combined with artificially suppressed interest rates and massive rounds of monetary interventions, unsurprisingly pushed asset prices to historically high levels. However, as noted, the boost to “profitability” did not come from organic economic growth. As I showed previously:

“Since the recessionary lows, much of the rise in ‘profitability’ has come from a variety of cost-cutting measures and accounting gimmicks rather than actual increases in top-line revenue. While tax cuts certainly provided the capital for a surge in buybacks; revenue growth, which is directly connected to a consumption-based economy, has remained muted.

Here is the real kicker. Since 2009, the reported earnings per share of corporations has increased by a total of 391%. This is the sharpest post-recession rise in reported EPS in history. However, the increase in earnings did not come from a commensurate increase in revenue which has only grown by a marginal 44% during the same period. This is an important point when you realize only 11% of total reported EPS growth actually came from increased revenues.”

“While stock buybacks, corporate tax cuts, and debt-issuance can create an illusion of profitability in the short-term, the lack of revenue growth the top line of the income statement suggests a much weaker economic environment over the long-term.”

With share buyback activity already beginning to slow, the Federal Reserve extracting liquidity from the financial markets, and the Administration continuing their “trade war,” the risks to extremely elevated forward earnings estimates remain high. We are already seeing the early stages of these actions through falling home prices, automobile sales, and increased negative guidance for corporations.

If history, and logic, is any guide, we will likely see the U.S. economy pushing into a recession in 2019 particularly as the global economy continues to weaken. This is something both domestic and global yield curves are already screaming is an issue, but to which few are listening.

Currently, analysts’ forward earnings estimates are still way too lofty going into 2019. As I noted in the recent missive on rising headwinds to the market, earnings expectations have already started to get markedly ratcheted down for the end of 2019. In just the last 45-days the estimates for the end of 2019 have fallen by more than $14/share. The downside risk remains roughly $10/share lower than that and possibly much more if a recession hits. 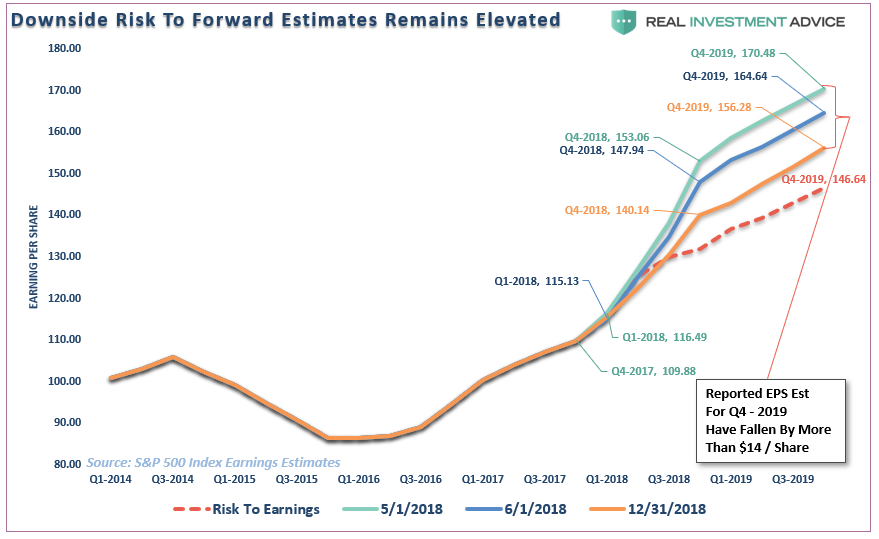 As stated, beginning in 2019, the estimated quarterly rate of change in earnings will drop markedly and head back towards the expected rate of real economic growth. (Note: these estimates are as of 12/31/18 from S&P and are still too high relative to expected future growth. Expect estimates to continue to decline which allow for continued high levels of estimate “beat” rates.) The end of the boost from tax cuts has arrived.

Since the tax cut plan was poorly designed, to begin with, it did not flow into productive investments to boost economic growth. As we now know, it flowed almost entirely into share buybacks to boost executive compensation. This has had very little impact on domestic growth.

The “sugar high” of economic growth seen in the first two quarters of 2018 has been from a massive surge in deficit spending and the rush by companies to stockpile goods ahead of tariffs. These activities simply pull forward “future” consumption and have a very limited impact but leave a void which must be filled in the future.

Nearly a full year after the passage of tax cuts, we face a nearly $1 Trillion deficit, a near-record trade deficit, and, as expected, economic and earnings reports are now showing markedly weaker projections. Apple (AAPL) is just the first of many companies that will confirm this in the coming weeks.

It is all just as we predicted.

The problem when it comes to blindly invest in markets without a thorough understanding of underlying dynamics is much the same as playing “leapfrog with a unicorn,” eventually, there is a very negative outcome.

As we head into 2019, all of the anecdotal evidence continues to suggest weaker markets rather than a surging recovery.

But, that is just a guess.

What I do know is that I will continue to manage our portfolios for the inherent risks to capital, take advantage of opportunities when I see them, and will allow the market to “tell me” what it wants to do rather than “guessing” at it.

While I read most of the mainstream analyst’s predictions to get a gauge on the “consensus.”  This year, more so than most, the outlook for 2019 is universally, and to many degrees, exuberantly bullish.

What comes to mind is Bob Farrell’s Rule #9 which states:

“When everyone agrees…something else is bound to happen.”