In this past weekend’s missive, I discussed the market’s completion of the 50% retracement. To wit:

“From a purely technical basis, the extreme downside extension, and potential selling exhaustion, has set the markets up for a fairly strong reflexive bounce.

Such an advance will ‘lure’ investors back into the market, thinking the ‘bear market’ is over.

Over the last couple of weeks, we have indeed had an extremely strong ‘oversold,’ reflexive rally, that has now reversed the conditions that ‘fueled’ the advance. “As shown above, all previous short-term oversold conditions have been fully reversed, with the market completing a typical 50% retracement of the previous decline.

Could the market rally more next week? Absolutely, given any good news on the virus, additional stimulus, and just general short-term market optimism. A 62.8% retracement is entirely possible.

However, history suggests that whatever rally still remains is likely a ‘gift’ to sell into.

It is that last sentence, which is the focus of today’s missive.

Currently, there is much hope the virus will end shortly, the economy will reopen, and the world will return to normal in a few weeks. The 15 million job losses, and the surge in unemployment, will revert back to historical lows, confidence will surge, and corporate earnings will quickly recover.

It’s a tall order, but this is the analysis as of late by Wall Street, who all want to be the first to “call the bottom” of the market. To wit, Goldman Sachs David Kostin turned bullish saying:

“The Fed and Congress have precluded the prospect of a complete economic collapse. Reduced “left tail” risk translated into a higher P/E multiple.” This takeover of capital markets means that Goldman’s “previous near-term downside of 2000 is no longer likely” even as its “year-end S&P 500 target remains 3000 (+8%).”

This analysis is based on the presumption, that despite the fact the major buyer of stocks, namely corporate share repurchases, will be missing that earnings will recover sharply once the “economy” opens back up for business.

To analyze the reality of these expectations, we need to review the history of the estimates for the S&P 500 from when 2021 estimates were first published by Standard & Poors in April 2019. The chart shows the progression in estimates April to September 2019, and March and April of 2020. (The dotted blue line is my original, unrevised estimate of the impact to earnings in February of this year.) Do you REALLY expect, with the economic devastation currently occurring, that earnings will only decline by 6%, and then fully recover in the subsequent 12-months?

As we noted this past weekend, the impact to the economy far exceeds what was seen in the previous two recessions. To wit:

Will the economy recover? Yes. Absolutely.

More importantly, for every “bear market rally,” there must be an excuse to support it. The latest “jawboning” of the rally from the mainstream media is that investors are looking “past” 2020 estimates, and into 2021. Maybe, but the estimates for 2021 are extremely elevated and have lots of room to fall.

For investors, the problem of just a mild earnings decline undermines the validity of expected price recovery in the S&P 500. With analysts hoping for a “V-shaped” recovery in both the economy and earnings, there should be a subsequent V-shaped recovery in prices. Currently, Wall Street has 2020 year-end price targets of 3000 on the S&P 500 and a surge to 3450 in 2020. Using those numbers, we can estimate valuation multiples using the “overly optimistic earnings estimates” above. As I stated in last weekend’s missive:

No “bear market,” in history, for any reason, ended with valuations between 20-28x earnings.

We showed this in 4-Phases Of The Full-Market Cycle:

“Valuations drive stock markets and returns over time. Famed investor Jack Bogle stated that over the next decade we are likely to see two more 50% declines.  A 50% decline from the all-time highs would put the market at 1600.” 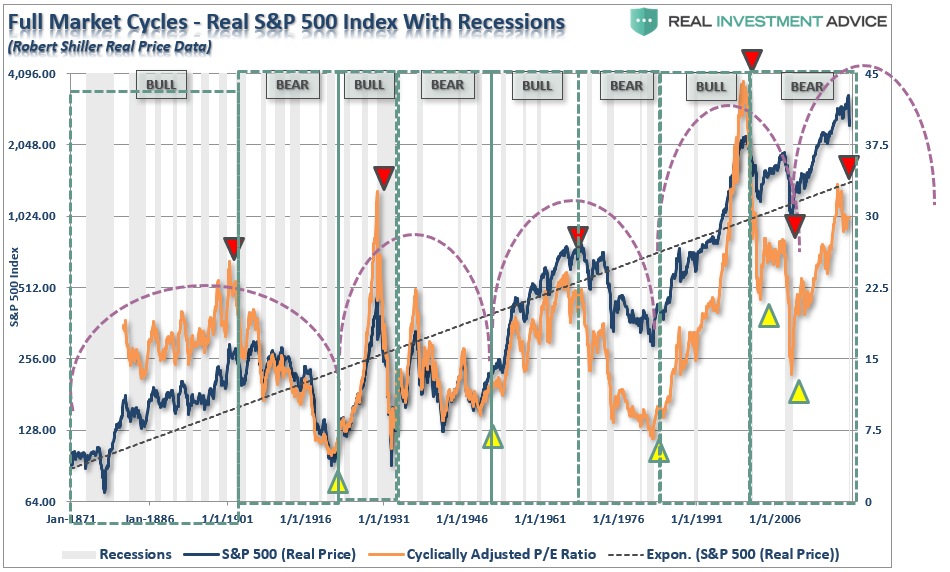 The Up Doesn’t Justify The Down

Yes, the Fed is clearly trying to “bailout” everything that, in this case, “doesn’t move.”  That stimulus gave the markets the lift it needed to stop the liquidity crash that was occurring in March. But, as I showed in the first chart above, the run in the markets has reversed that oversold condition that existed previously.

Doug Kass made some very important points in this regard yesterday:

Jeff Marcus from TP Analytics made similar comments in his morning note,

“What happens next depends on whether the current situation is a 2008-like situation or not. If it is, we will most likely sell-off again and retest the recent lows.

If it is not, we are probably in for a tough slog, but will not see S&P 500 @ 2200 again. The true test in the weeks ahead will most likely be the stock market’s reaction to the inevitable parade of negative news during earnings. If stocks that report, do not fall, but remain stable or rise on bad news, the market will probably be okay from here, but if stocks are not resilient after they tell their sad stories, we may test the S&P500 2180 level again.”

They are both right, and as we noted above, while the market traded to its logical 50% retracement from the lows (2800), there is plenty of ability, and short-term enthusiasm, for the market to trade to its 62.8% retracement level of 2946, which would be within 50-points of Goldman Sachs 2020 year-end price target. But a LOT of things have to go “right” for that to happen.

However, even if such does indeed turn out to be the case, the math doesn’t really work.

If I am right, and the economic recovery doesn’t take a “V-shape,” or worse, there is a secondary outbreak of the “virus” which shuts the economy down again; the downside price target is markedly lower. This is particularly the case if earnings expectations are ratcheted down to adjust for the economic impact stemming from the loss of consumption, incomes, and wealth to this point. Therefore, the chart below lays out the risk/reward for investors currently.

With only a 6.7% advance available to achieve the 62.8% retracement, the “risk” required to achieve that gain is heavily offset by the 19% decline to retest the March 23rd lows.

In other words, for each $1 of capital you have exposed to equity risk currently, you are risking nearly $3 of loss.  Such hardly seems to be a “rewarding proposition,” but those are odds any casino in Las Vegas would love to give you.

There is little reason to be overly aggressive in your positioning currently.

Investing isn’t a competition for who can say they “bought the bottom.” However, there is a heavy penalty to your retirement goals if you are wrong.

When the bottom can clearly be seen, and the economic clouds have dissipated, there will be more than enough of the next “bull market” cycle remaining to profit from. However, if you are spending all of the next advance making up previous losses, it really wasn’t much of an investment strategy to begin with.