You are receiving this message since the alert which was sent to Bear Trader subscribers and former Bull & Bear Tracker subscribers on Friday June 26th was out of the ordinary.

Since the signal was still green on Friday morning and the stock market declined significantly after the open the Bear Trader sent an alert at 11:07 AM to increase stakes from 50% to 100%. The alert contained a limit price of $39.35 for the SPXL and $302.00 for the SPY. Based on subsequent prices reached by shares after the text messages were sent the orders to purchase the shares were filled for all traders who entered orders.

Even though the signal was green and closed at green on Friday June 26th the Bear Trader sent an alert at 3:19 PM to sell the shares purchased at the prices paid for them earlier in the day. The alert to reduce the position by 50% at a limit price while the green signal was in effect was sent for two reasons:

Based on the number of nights at risk the current alert’s elapsed time period is the longest since the Bear Trader’s signals have been published. The Bear Tracker is extremely risk conscious. To best mitigate risk it keeps its number of overnight stays in the market per month to as low as possible. The table below depicts that for June 2020’s four prior alerts the Bear Trader spent a total of five nights in the market. Bear Trader also utilizes initial 50% stakes to enable it to average down which was the case on Friday. 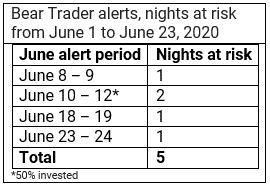 Bear Trader’s mission is to provide subscribers with opportunities to generate a minimum of 100% of cumulative net trading gains through the fourth quarter of 2022. The SCPA (Statistical Crash Probability Analyses), an algorithm affiliated with Bear Trader, has forecasted that the final bottoms for the US and the markets of a dozen other of the world’s leading 14 countries ranked by GDP will occur from September to December of 2022.

Since the Bear Trader is in 100% cash for a majority of the time it’s the ideal investment vehicle for the defensive investor and also for retirement accounts. For more about the Bear Trader and the SCPA go to https://beartrader.com/about-bear-trader/.