Technically Speaking: Why This Is Still A Sellable Rally, For Now.

In this past weekend’s missive “Trump Infects Markets Bounce,” we discussed even though the market had bounced off support, we still consider it a “sellable rally,” for now. The comment generated quite a few emails, mainly since we also discussed that markets are generally positive in election years. To wit:

“Lance, I am confused. On one hand you say that investors should use any near-term rally to rebalance risks. But then discuss how markets tend to be positive the majority of the time during election years. I am not sure what to do.” – KC

It’s a great question that drives to the heart of our risk management process.

“Notably, while the rally that we have witnessed from the recent lows has eaten up a fair bit of the previous oversold condition, the MACD “buy signal” was triggered on Friday.

Such suggests that we could see some additional buying next week. However, again, with the failure at the 50-dma, such means continuing to use rallies to rebalance risks accordingly.” The good news is that we did indeed see a spurt of “additional buying” on Monday, which allowed the market to clear the 50-dma. Such puts the previous September highs back within the context of the rally that started two weeks ago.

The bad news is that investors chased the market on “hopes” for further stimulus and a “Biden” victory during the upcoming election. There is a reasonable probability that one or both of those outcomes will not occur.

Lastly, as shown below, while the very short-term technicals are bullish, the intermediate-term measures have not reversed yet. Such could limit upside potential from current levels. If we break down the commentary and charts into critical points, we can gain some clarity.

Notably, the markets have returned to more neutral territory, and as noted previously, the correction has been orderly.

“Over the last couple of weeks, we have been discussing the ongoing market correction. As shown below, the sell-off has been orderly and not one of a ‘panic’ induced decline.“ – The Selloff Is Overdone,

So, why do we think this is still a “sellable rally?”

In the short-term, we remain “bullish-biased” in portfolios. However, there are several significant concerns we have over the intermediate to long-term.

Despite the recent correction, volatility remains hugely suppressed. “Over-confidence” by investors in the market is a “contrarian” indicator we watch closely. As noted above, the recent decline has shown no signs of investors “panic selling,” instead they appear to have become even more complacent. Notably, while the recent correction did reduce our fear-greed index somewhat, it remains elevated. Again, like volatility, overall investment positioning doesn’t show “fear” of a deeper correction. While the indicator is currently in more “neutral” territory, it suggests gains are likely limited short-term. The same goes for positioning by professional investors. With positioning back to more neutral territory, any rally in the market is likely limited. The current psychological conditions suggest the short-term bottom in the market remains intact. However, given that much of the more “bullish” exuberance was not displaced, the upside may get confined to previous highs.

As noted, much of the impetus for the rally was “hope” of more stimulus. However, currently, there is little evidence of another CARES Act occurring before the election, particularly with the Senate in recess. Such could wind up disappointing investors in the short-term, particularly as economic growth continues to wane.

In “Earnings Don’t Support The Bullish Thesis,” I noted that while estimates were lowered by Standard & Poors (latest update was September 30th), the earnings revisions continue to fall despite media commentary about a strongly recovering economy. 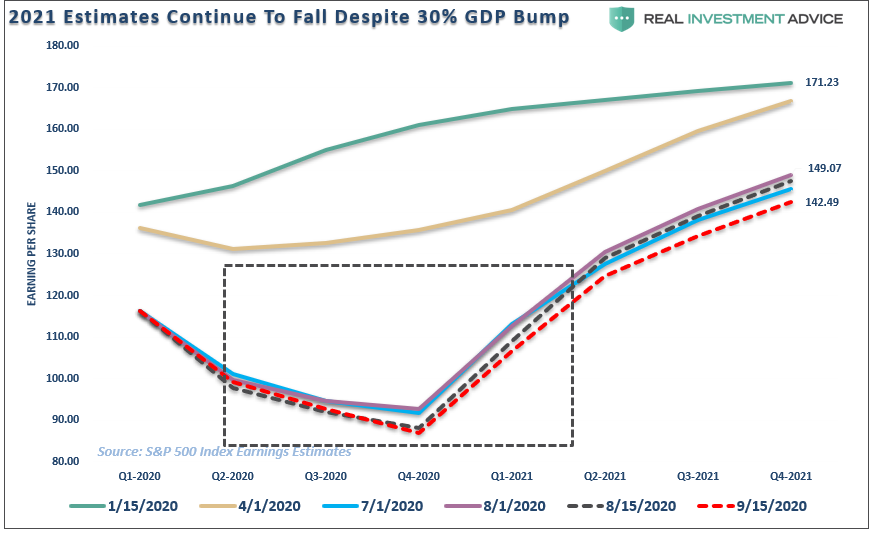 Let me point out some critical points:

But this isn’t a new story, but one that existed over the last two years as shown by the S&P 500 total return attribution analysis. Investors have been consistently “betting” on the promise of “stronger economic growth.” However, such has not been the case as corporate profits have weakened, economic growth has slowed, and valuations have only continued to expand.

GAAP Earnings (actual real earnings), as compared to GDP, explains the problem. Not surprisingly, since “stocks are a function of the economy,” there is a decent correlation between economic growth and corporate earnings. Such is because, without economic growth, consumers don’t have paychecks with which to consume, which is where corporate profits come from. Such is also reason to remain concerned about the persistent gap between “the stock market” and “corporate profits.” Eventually, the two will reconnect either by:

From a purely technical perspective, the market remains in a long-term deviation from historical trends. The problem with long-term trend analysis, much like valuations, is that markets can “remain irrational longer than logic would predict.” It is during these periods of “irrationality” where investors begin to believe “this time is different,” or “such and such” doesn’t matter any longer due to Central Bank interventions.

Those beliefs have, without exception, wound up costing investors more than they ever thought possible.

As noted above, on a short-term basis, if the market can clear the 50-dma, a subsequent rally back to all-time highs is certainly not out of the question.

However, when viewing longer-term time frames, the risks become more evident. As shown in the “weekly” chart below, the deviation from long-term means remains at extreme levels. Historically, these deviations correct themselves. Such a “mean-reverting” event can occur over a drawn-out period, as seen in 2015-2016. Or, it occurs rapidly, as seen in both 2018 and 2020. What is essential to understand is that while the short-term bullish “meme” is hard to resist, these “mean-reverting” events occur regularly. They also tend to happen when the media least expects them too. For many, it is hard to understand how there can be two simultaneous but opposing views. In the short-term, markets are “bullishly” biased, which keeps portfolio allocations weighted toward equity risk. However, longer-term, there is a clear “bearish” backdrop to consider.

That dichotomy is what makes investing difficult for most investors. Since they become so focused on the “short-term” view, as that is where all the “action” is, they dismiss the long-term view entirely. Unfortunately, such repeatedly leads to poor outcomes.

For now, and for all of the reasons stated herein, our portfolio management processes change from “buying dips” to “selling rallies.”

Let me be clear. Such does not mean we are “selling everything and going to cash.”

Instead, we will use rallies to:

As we have discussed previously, momentum-driven markets are a tough thing to kill. However, when they do turn, the momentum works equally well in reverse.

If the bulls are right, then it is a simple process to remove hedges and reallocate back to equity risk accordingly.

However, if there is a risk to the bull market, a more conservative portfolio will protect capital in the short-term. The reduced volatility allows for a logical approach to making adjustments as the correction becomes more apparent. (The goal is not to get forced into a “panic selling” situation.)

It also allows you to buy at deeply discounted values.

For all of these reasons, we continue to use rallies as opportunities to rebalance risk, follow our portfolio management rules, and protect capital as needed.

The post Technically Speaking: Why This Is Still A Sellable Rally, For Now. appeared first on RIA.