During the past couple of weeks, I have discussed the rising levels of bullishness in the markets. We have pointed to indicators like extreme investor positioning, put/call ratios, etc. However, the current surge in margin debt also confirms market exuberance.

Margin debt also confirms the correction and the recent exuberance.

Everything Is At An All-Time High

Before we dig further into what margin debt tells us, let’s begin with where we are currently. Greg Feirman recently summed it up nicely.

“Friday was an absolute breakout to new ATHs-fest (All-Time Highs). The S&P closed at a new all-time high just below 3,700. The Russell tacked on another 2.37% and closed just below 1900. Junk bonds and regional banks are super strong. Of course, if the indexes are breaking out, so are a lot of individual stocks.” 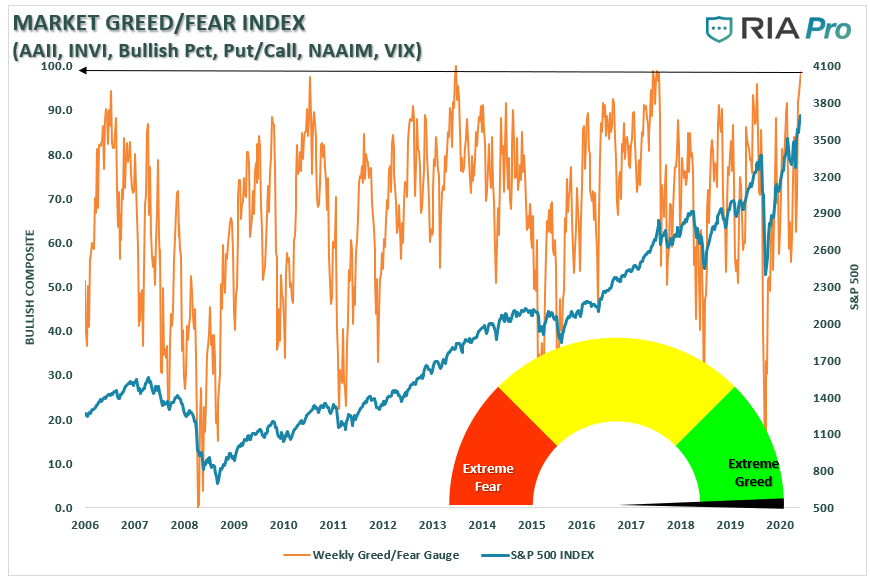 As Howard Marks noted in a recent Bloomberg interview:

“Fear of missing out has taken over from the fear of losing money. If people are risk-tolerant and afraid of being out of the market, they buy aggressively, in which case you can’t find any bargains. That’s where we are now. That’s what the Fed engineered by putting rates at zero.

“,,,we are back to where we were a year ago—uncertainty, prospective returns that are even lower than they were a year ago, and higher asset prices than a year ago. People are back to having to take on more risk to get return. At Oaktree, we are back to a cautious approach. This is not the kind of environment in which you would be buying with both hands.

The prospective returns are low on everything.”

The Issue Of Margin Debt

This exuberance requires “fuel,” which brings us to margin debt. As I explained previously:

“Margin debt is not a technical indicator for trading markets. What margin debt represents is the amount of speculation that is occurring in the market. In other words, margin debt is the ‘gasoline,’ which drives markets higher as the leverage provides for the additional purchasing power of assets. However, ‘leverage’ also works in reverse as it supplies the accelerant for more significant declines as lenders ‘force’ the sale of assets to cover credit lines without regard to the borrower’s position.”

The last sentence is the most important. The issue with margin debt, in particular, is that the unwinding of leverage is NOT at the investor’s discretion. It is at the discretion of the broker-dealers that extended that leverage in the first place. (In other words, if you don’t sell to cover, the broker-dealer will do it for you.) When lenders fear they may not recoup their credit-lines, they force the borrower to either put in more cash or sell assets to cover the debt. The problem is that “margin calls” generally happen all at once, as falling asset prices impact all lenders simultaneously.

Margin debt is NOT an issue – until it is.

It is when an “event” causes lenders to “panic” that margin becomes problematic.

We have seen margin liquidation events twice in the last 15-years. The first was during the 2008 financial-crisis that forced Lehman into bankruptcy.

The second time was in March of this year. How do we know that March was a “Margin Call?”

There are two reasons. Free credit balances are crucial as it is the difference of “unused margin plus cash,” which gets subtracted from “outstanding margin.” In other words, like a credit card with a zero balance, when the lined gets paid off, there is a positive free cash balance; when it is negative, it shows the utilization of the “credit.”

The chart below overlays the two: 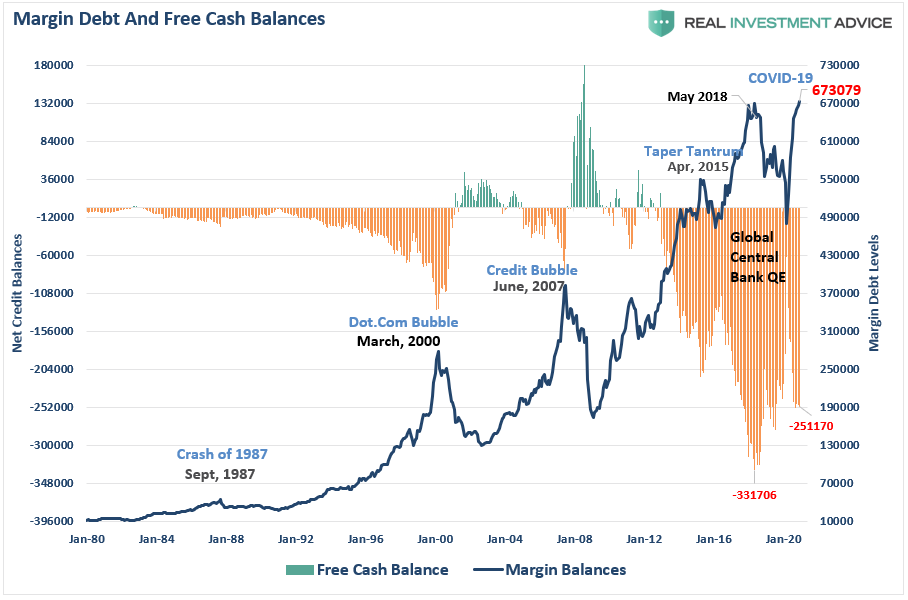 The sharp reversal of margin debt from the March lows shows the speculation level, which has ensued in the markets due to the Fed’s interventions. (Margin debt lags by 2-months, so I have used the average margin debt growth rate from March to estimate the last 2-months. Given the rapid surge in the market in November, I am probably underestimating current levels.)

As noted, when markets are rising and investors are taking on additional leverage to increase buying power, margin debt supports the advance. However, the magnitude of the recent surge in margin debt also confirms the current levels of investor exuberance. Note that during the 1987 correction, the 2015-2016 “Brexit/Taper Tantrum,” the 2018 “Rate Hike Mistake,” the “COVID Dip,” the market never broke its uptrend, AND cash balances never turned positive.

Both a break of the rising bullish trend and positive free cash balances were the 2000 and 2008 bear markets’ hallmarks. Such is another reason that March was just a “correction.”

Had such occurred, the positive free cash balances, and significantly reduced valuation levels, would have supported the beginning of a longer-term bull market. However, with negative cash balances surging and extreme deviations from long-term means, investors are likely once again set up for another reversion. Such is not even to mention the long-term correlations to valuations. As noted in “Why This Isn’t 1920,” the highest correlation between stock prices and future returns comes from valuations.

Margin data goes back to 1959 to get a long-look at margin debt and its relationship to the market. The chart below is a “stochastic indicator” of margin debt overlaid against the S&P 500. The stochastic indicator is a momentum indicator developed by George C. Lane in the 1950s. The chart shows the position of the most recent margin debt level relative to its previous high-low range. The indicator measures the momentum of margin debt by comparing the closing level with the range over the past 21-months.

Currently, the indicator is back to overbought levels, which suggests market risk has risen also. Our stochastic measures of the market itself are confirming much the same.

I want to make a critical point here. Margin debt, like valuations, are “terrible market timing” indicators and should not be used as such.

Rising levels of margin debt are a measure of investor confidence. Investors are more willing to take out debt against investments when shares are rising, and they have more value in their portfolios against which they can borrow. However, the opposite is also true as falling asset prices reduce the amount of credit available, and the liquidation of assets must occur to bring the account back into balance.

I agree and disagree that margin debt levels are simply a function of market activity and have no bearing on the outcome of the market.

As we saw in March, the double-whammy of collapsing oil prices and economic shutdown in response to the coronavirus triggered a sharp sell-off fueled by margin liquidation.

Currently, the majority of investors have forgotten about March. Or worse, assume it can’t happen again for a variety of short-sighted reasons. However, the “gas tank” is full once again as investors are more exuberant now than at the peak of the market in 2000, as noted by Sentiment Trader yesterday. Sure, this time could indeed be different. That has remained the “sirens song” of investors since March. However, as Sentiment Trader summed up the last time we wrote on this topic, such is usually not the case.

“Whenever some of this data fails to lead to the expected outcome for a few weeks or more, we hear the usual chorus of opinions about why it doesn’t work anymore. This has been consistent for 20 years, like…

All of these sound good, and for a time it seemed like they were accurate. Then markets would revert and the arguments would get swept into the dustbins of history.”

It’s not too late to take action to preserve capital now, so you have the money to invest with later.

While we remain long-biased in our equity portfolios, we have begun to reduce some of our big winners (take profits) and adding to our more defensive-oriented positions. While we certainly want to participate in the market’s current upside, we will also give up some gains to protect against the eventual reversion.

While it certainly may “feel” like the market “just won’t go down,” it is worth remembering the sage words of Warren Buffett.

“The market is a lot like sex, it feels best at the end.”

In the short-term, holding higher cash levels will indeed provide some drag between our portfolio and the major market index. However, when the first “cold snap” washes across the markets, our preparation should protect us against the “bite.”

We remain “bullish” on the markets currently as momentum is still in play. However, just as any farmer is keenly aware of the signs “Winter” is approaching, we are just taking some precautionary actions.

To spin a bit of Warren’s quote:

“If you engage in the market in an unprotected fashion, you may not want the unexpected surprise.”