The 2009 Bull that had a nine-year run died and the 2018 BEAR market was born on January 31, 2018. The market’s taking less than two weeks to decline by 8% from its all-time high that it made on January 26, 2018 and be at a loss of 1% for 2018 is a game changer. The volatility has severely damaged investor psychology. The abnormal period of historically low market volatility has ended. The market having a severe correction within days after reaching an all-time high has added a new level of stress for investors who had become complacent during an extended period of historically low volatility. This sudden shock insures that the market’s highs for the decade ending 2020 were made on January 26, 2018. The inability of the market to reach new highs will cause investors to become increasingly frustrated. Investors going from a buy-and-hold to a locking-in-gains investment philosophy will provide all of the nutrition that an infant bear needs to become very vicious and powerful. The VIX chart below depicts the spike in market volatility as compared to the volatility of the markets since 2013. 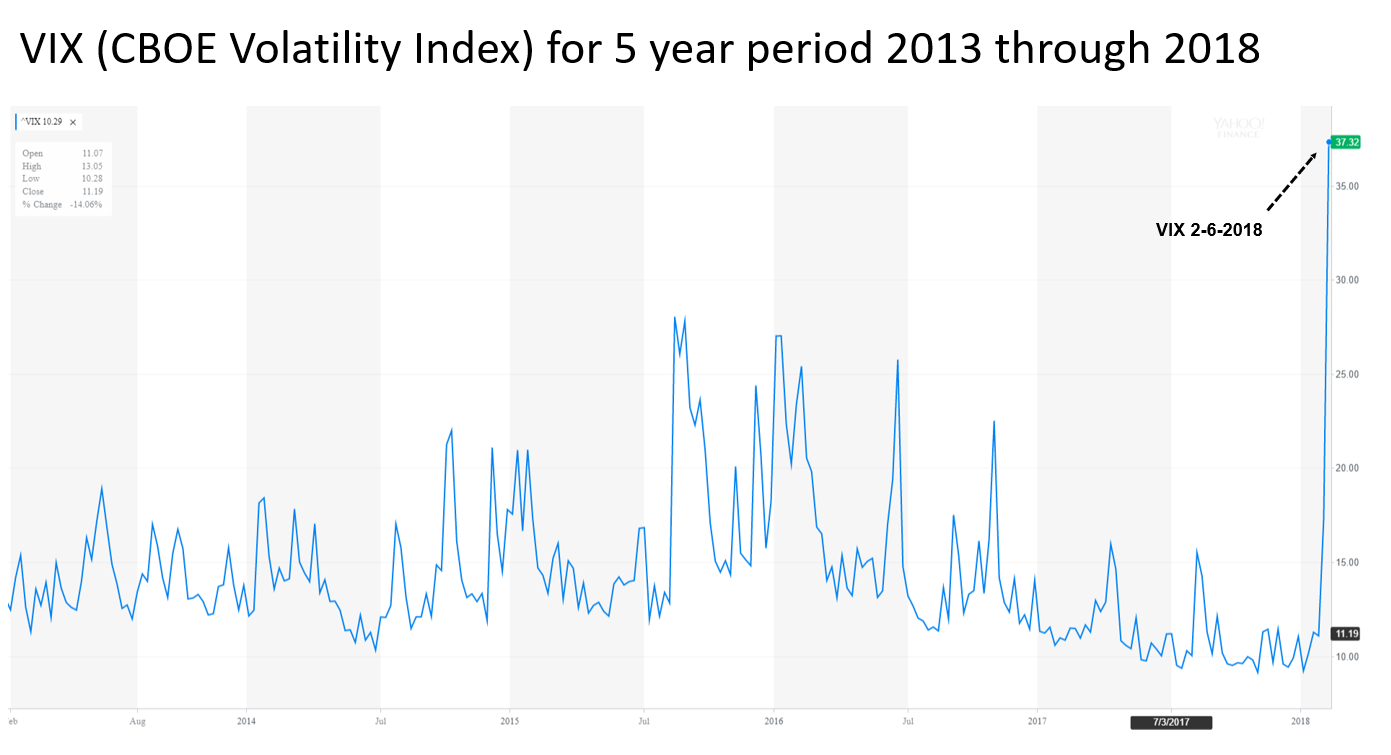 Based on the decline’s velocity its either a prelude to an all-out crash soon happening or the beginning of a prolonged bear market. For either case, my prediction is that the market will decline by at least 50% from peak to trough before the new bull is born. I am recommending the deployment of a 90/10 Crash Protection Strategy. For information on the 90/10 which is the only fail-safe strategy that one can utilize to protect their liquid assets from crashes, recessions and depressions view video below entitled “Crash! & 90/10 Crash Protection Strategy”.

Based on my 41 years of experience and the extensive research that I have conducted on bull and bear markets my prediction is that the recent 2018 all-time high will prove to be the market’s high for the decade ending 2020. A new bear market, the first since 2007 is now underway. The 2007 to 2018 time-span of 11 years between bear markets is the third longest since 1929. The 1948 to 1962 period spanned 14 years and the span for 1987 to 2000 was 13 years. The table below provides the peak to trough percentage declines and the duration for all bear markets that have occurred since 1929. 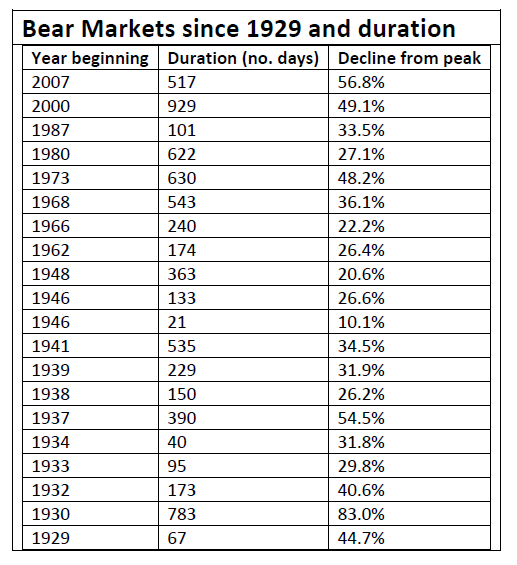 The S&P 500’s dividend yield of 1.7% in January of 2018 ranks as the second lowest yield as compared to all market peaks dating back to 1870. The market for the two prior peaks of the dotcom bubble bursting and the Lehman bankruptcy declined by approximately 50% from peak to trough. My prediction is that the decline from the 2018 peak will at the least mimic the peak to trough declines of the Dotcom bubble and pre-Lehman crash market peaks. 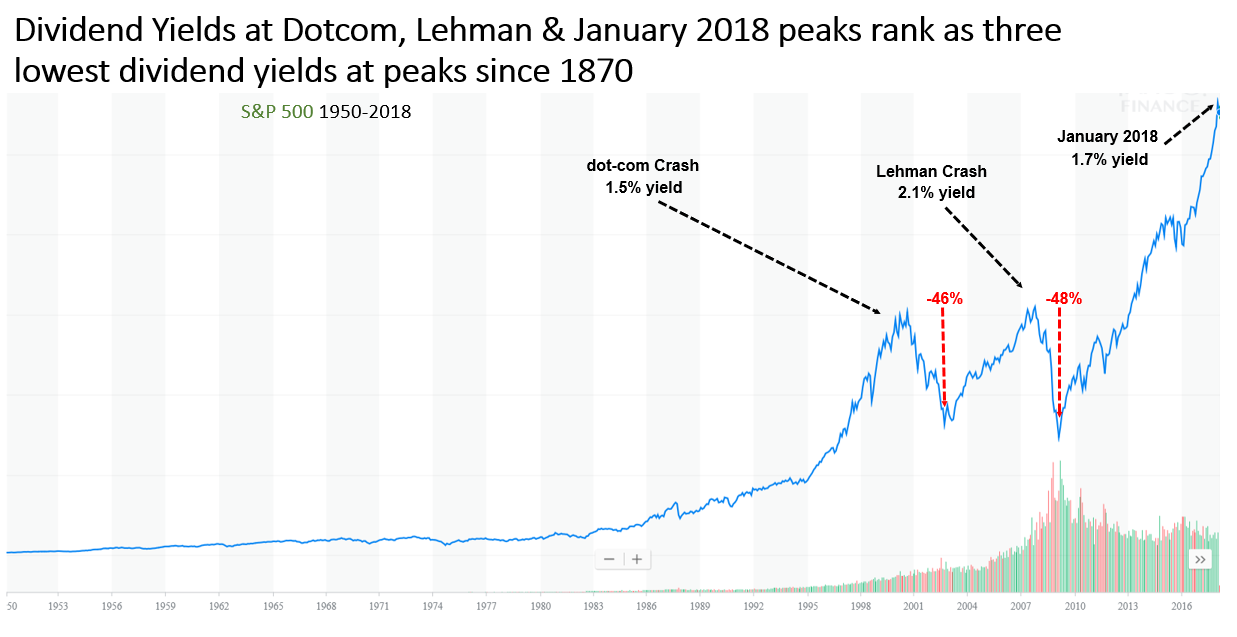 The catalyst for February 2018’s swift and the steepest of declines for the markets since August 2011 was the release of the January 2018 jobs report on February 2, 2018. The report disclosed that the unemployment rate in the US had reached a 45 year low of 4.1%. However, what disturbed the market is that the wages for a worker had increased by 2.9% for January 2018 as compared to the year earlier January. The Jobs report was in support of a January 31, 2018, Bureau of Labor report which indicated that employee compensation costs for a business in 2017 rose 2.6% as compared to 2016. The data indicates that the US economy is overheating and that the risk of inflation beginning has increased. This in turn has increased the probability that the US Federal Reserve Bank will take a much more aggressive approach to raising interest rates throughout 2018. Prior to the most recent jobs data announcement all indications were that the Federal Reserve would raise rates three times during 2018.

Many of the above causes and effects which had been highlighted in Trophy Investing’s October 2016 video entitled “Five Bubbles Putting Market on Verge of Crash” intensified throughout 2017 and early 2018. The video is currently viewable at www.trophyinvesting.com and is in the process of being updated.

During 2016, I conducted a significant amount of research on the prior market crashes. It resulted in my developing an algorithm that I utilized to issue market crash warnings during 2016 when negative interest rates posed great risks to the global economy. See equities.com article “NIRP Crash Indicator Signals Very Reliable for 2016”. I also produced numerous articles and videos about the impact that interest rate volatility could have on the stock market and global economy. These videos and articles are in the process of being made available to Trophy Investing’s members. Trophy Investing will also be updating some of the videos and will be producing additional crash related content including reports and videos. For access to this content register for a FREE membership at www.trophyinvesting.com.

Disclaimer. Mr. Markowski’s predictions are frequently ahead of the curve. The September 2007 predictionsthat appeared in his EquitiesMagazine.com column stated that share-price collapses of the five major brokers, including Lehman and Bear Stearns, were imminent. While accurate, they proved to be premature. For this reason he had to advise readers to get out a second time in his January 2008 column entitled“Brokerages and the Sub-Prime Crash”. His third and final warning to get out, and stay out, occurred in October of 2008 after Lehman had filed for bankruptcy. In that article “The Carnage for Financials Isn’t Over”he reiterated that share prices for Goldman and Morgan Stanley were too high. By the end of November2008 the share prices of both had fallen by an additional 60% and 70%, respectively — new all-time lows.