“I would not interpret the currently very flat yield curve as indicating a significant economic slowdown to come.” (and subprime is contained.)

We have many indications recession is near. I’ll mention a few others later. I expect a Strange Recession because these are strange times. But that also means the inverted yield curve and other long-standing patterns might not signify what they did in the 1980s. Nonetheless, all this smoke suggests some kind of fire is burning.

The yield curve is really just a symptom. I like to compare it to a fever—not serious in itself, but a sign you have an infection or some other ailment. An inverted yield curve means something is wrong in our economic body. So today we’ll consider what it means. I’ll start by updating a 2018 letter on this topic (see The Misunderstood Flattening Yield Curve). Then we’ll look at some expert perspectives on the current situation.

“Yield curve” sounds sophisticated but is nothing more than a line showing current interest rates for various maturity periods, with rates on the vertical axis and time on the horizontal. Generally it looks something like this: 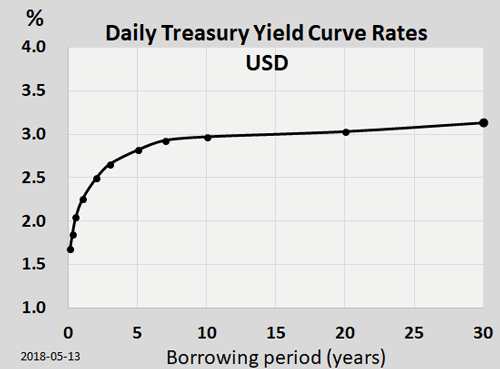 The yield “curve” can be a curve, a straight line, or a bent line like this one from 2018. Normally it slopes upward from the lower left to the upper right. All the discussion and drama are about the line’s shape and angle.

Here is the current view, with one year ago and two years ago shown for comparison: 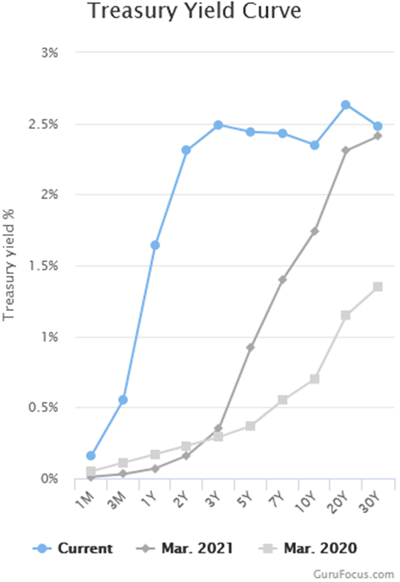 You can see how interest rates rise quickly from 3-month T-bills out to the 2-year area, then go flat. You can also see it wasn’t like that a year, or even six months, ago. This “flattening” is a new development.

Moreover, the area between 3Y and 10Y actually angles slightly downward. That is what we mean by “inversion.”

Here is another chart from Gavekal showing the changes in the last six months. Will Denyer thinks the yield curve is not signaling recession, at least yet. Will is smarter than I am, but I’m not sure he understands what an inverted yield curve actually predicts. 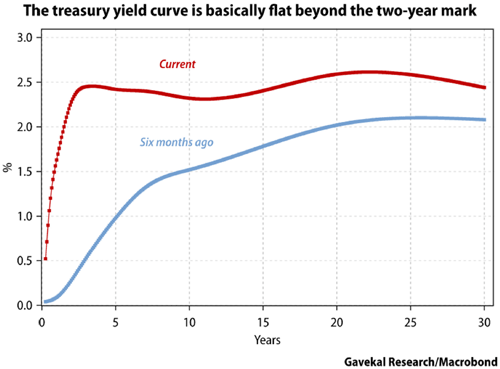 Here’s a table showing March’s daily Treasury par yields. Normally you would see numbers increase along each row. I highlighted points where they drop. These are inversions and they are not normal. They seem to be spreading from right to left. 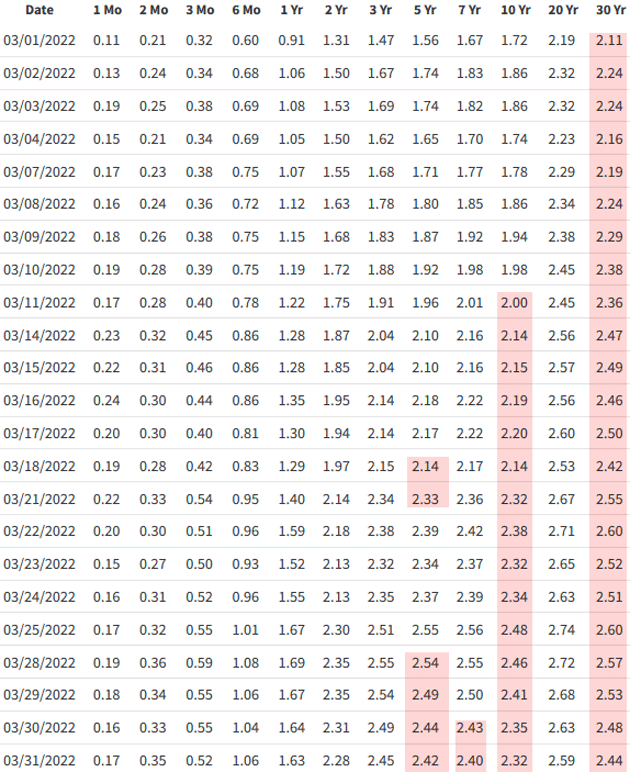 So far, the full yield curve isn’t inverted, only parts of it. But this is definitely abnormal and combined with everything else we know, it’s a ringing alarm bell. The more inverted the yield curve is and the longer it stays that way, the more confident we are that a recession is coming.

In a true inversion we would see the entire curve angled down from left to right. That last happened in 2005. Were we in recession then? No, not at all. The economy was booming. In fact, the yield curve stayed inverted until mid-2007. Some of us saw cracks forming in the economy, and said so at the time. But the actual recession would not begin until December 2007.

I began to predict a recession in late 2006. I remember being on Larry Kudlow’s show with Nouriel Roubini and John Rutherford. Larry and John beat us up for our gloom and doom perspective. And you know what? They were right for the next six months. The market went up another 20%, right before it dropped over 50% or more.

That’s a longstanding pattern. The inverted yield curve has been a pretty reliable recession indicator but it shows up far in advance—months or even more than a year. We might better think of it as signaling the cycle’s “blowout” stage. People see the inversion, observe nothing bad happening, then throw caution to the wind.

Another way to illustrate inversions is with a yield spread, i.e., a long-term yield minus a short-term yield. You can graph the difference and it goes below zero when the short-term yield is higher, meaning an inversion exists between those two points on the yield curve. This chart shows the spread between 10-year and one-year Treasury yields: 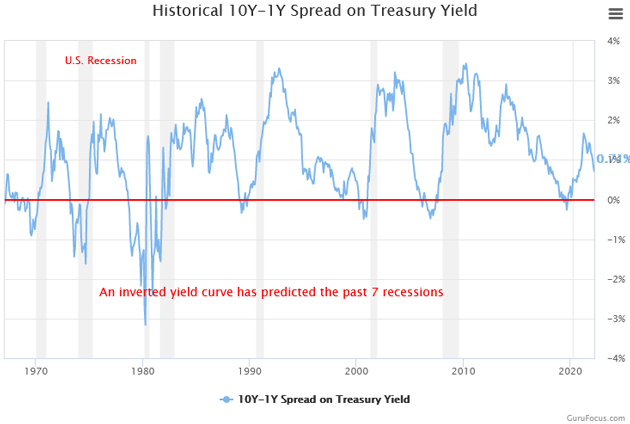 The gray vertical bars are recessions. You can see how the spread dropped below the 0% line before each one, and is now close to that point again. But notice also how long it stayed inverted before the last recession, and how far in advance. The 10Y‒1Y spread dropped below zero in January 2006, came back above for a little bit, stayed there and was moving higher when the recession finally began. The same happened in 2000.

Here’s a slightly different chart showing the 10Y/3M (three months) and 10Y/2Y spreads. That last one is the “tens and twos” you hear traders discussing. It recently plunged and actually dipped below zero last week. 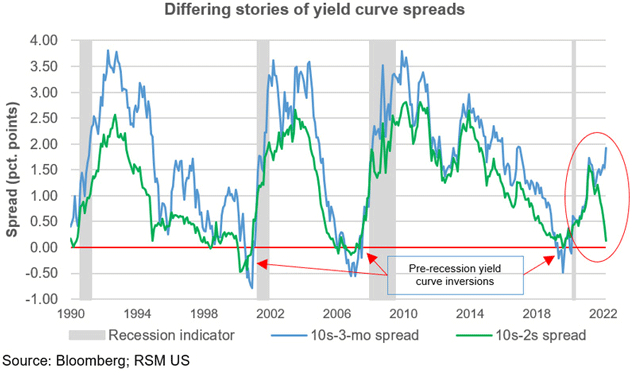 You can vary the parameters but the broad principle holds pretty well. Yield curve inversions precede recessions by anywhere from a few months up to two years. Oddly, the yield curve actually predicted the pandemic recession long before we knew about the virus. Many analysts, including your humble analyst, noted the economy was slowing markedly in late 2019. We will never know the counterfactual as to whether we would have gone into recession without the pandemic.

That said, yield curve inversion as a recession indicator is not quite as simple as many think.

One of the first to quantify the inverted yield curve/recession connection was economist Campbell Harvey, who is now on the faculty at Duke University. It was the subject for his 1986 University of Chicago doctoral dissertation (short summary here). Others confirmed and expanded on his findings, which are now conventional wisdom on Wall Street.

In the spirit of “go to the source,” I called Campbell this week to ask what he sees in the current data. He started by reminding me that his original idea was to compare a short-term yield with a long-term one. You could pick many different points. He found the 3M/10Y Treasury spread seemed the most reliable. He was also quick to note that his indicator requires measurement over an entire quarter. Inversions of a few days or weeks don’t qualify.

The present situation is a bit odd in that the 2Y/10Y is close to inverted, while the 3M/10Y is not. (Again, look at the green and blue lines in the RSM chart above.) Under Campbell’s rules, that means we don’t have a recession signal. However, even a flat yield curve isn’t good news. It is associated with lower economic growth, as we are seeing right now.

One issue here is that the 3M yield is more sensitive to Federal Reserve policy. It is abnormally and artificially low right now, which makes the spread wider. This will change as the Fed hikes short-term rates. Other things being equal, the Fed’s present trajectory should have a flattening effect on the yield curve, and eventually invert it unless long-term rates rise. Indeed, that’s what the Fed wants: to cool growth, thereby reducing inflation. (Whether it will actually work that way is another discussion.)

(Sidebar: Federal Funds and other short-term rates are abnormally low for this point in the cycle. Given almost 8% inflation and Fed funds at roughly 50 basis points, a truly inverted yield curve isn’t possible unless the Fed hikes far more than most observers believe. Oddly, the FOMC members actually forecast six more rate increases this year and several early next year. It seems the only true believers in the Fed raising rates are the people who will actually do it. We will see.)

The economy is also still recovering from the COVID disruptions and associated changes in business and consumer preferences, plus the extensive supply chain snarls. Then of course we have the major changes sparked by the Russia-Ukraine War and economic sanctions. All these go into a witch’s brew with economic results that are as yet unknown.

In June of 1996, Fed economists Arturo Estrella and Frederic S. Mishkin of the Federal Reserve Bank of New York, published a quite important paper titled “The Yield Curve as a Predictor of U.S. Recessions.”

They noted: “The yield curve—specifically, the spread between the interest rates on the 10-year Treasury note and the three-month Treasury bill—is a valuable forecasting tool. It is simple to use and significantly outperforms other financial and macroeconomic indicators in predicting recessions two to six quarters ahead.”

Estrella and Mishkin demonstrated that the more negative the 90-day average of the difference between the 90-day Treasury rate and the 10-year bond rate, the more likely it is that we will have a recession within about four quarters. They assign the odds of a recession with each level of the yield curve, but note that the odds at a particular level might be higher today than in the past for a variety of reasons. In subsequent papers, they noted that of 26 different indicators, only a negative yield curve was a truly reliable predictor of recessions. The longer the yield curve remains negative, the more likely there will be a recession.

Thus it was easy to make a recession call/warning in August of 2000. Somewhat premature, but not by much. In 2006, it was easily 12 months. Interestingly, I actually called Fred Mishkin, one of the authors of the Fed study, and asked him if he thought the inverted yield curve then was signaling recession. Long and short, he basically said no.

As for now, the Estrella/Mishkin indicator show low recession odds because we haven’t seen the kind of inversion that occurred in the past. And that’s mainly because the Fed has kept short-term rates so abnormally low. Three-month rates need to get a lot higher to produce that signal.

My friend Jim Bianco generously shared his trader’s perspective in a recent must-read Twitter thread. I’ll quote it in full here, then have some remarks afterward. (Warning: This reads abruptly in spots because he’s breaking a longer discussion into a series of 280-character tweets.)