​Tariff Is 4th Nail in 2009 Bull’s Coffin; Trade Wars Do Not Go Well with Markets

Yesterday, US President Donald Trump announced that the US would impose a 25% tariff on those countries importing steel and a 10% tariff on aluminum into the US. The reaction by the leaders of foreign countries has been harsh. President Trump’s push back tweet “trade wars are good and easy to win” against the incoming wave of criticism by foreign leaders and US economists and analysts has further aggravated the situation. The tariffs are the fourth nail to be pounded into the 2009 Bull’s coffin.

Trade wars do not go well with markets. The value of US steel and aluminum companies increased by $2.1 billion yesterday. The value of everything else in the market declined by $328 billion.

Give my history-repeats-itself philosophy that have utilized throughout my 41year career to research the markets I went to the history books. In June of 1930, Herbert Hoover enacted the Smoot-Hawley Tariff Act which was eight months after the 1929 crash. The belated Jude Wanniski, the former the associate editor of the Wall Street Journal argued that the stock market crash itself was heavily affected by Smoot-Hawley since Senator Smoot and Representative Hawley had introduced the bill in 1928. The excerpt below is from the article “Did the Smoot-Hawley Tariff Cause the Great Depression?”:

“Wanniski argues that “the stock market started anticipating the act as early as December 1928” and it fell over the next year as the legislation to raise tariffs looked likely to pass and rose when it seemed the legislation might fail.”

This instituting of tariffs and the declaring of trade war is another history-repeats-itself lesson that should have already been learned by the Trump Administration. A tariff is a bad omen for the stock market. It’s yet another reason why the world’s savviest investors will continue to exit the market. With each additional nail the probability increases that the market is not get back to its January 2018 anytime soon. Read my February 28, 2018, “Another Nail Pounded into 2009 Bull’s Coffin” article to see the three first nails.

The chart below which depicts the stock market’s bubbles since 2007 is based on the price history of the S&P 500 versus long-term US government bonds for the period of 2003 through February 2018. The large bubble which had been in place prior to the election of Donald Trump as U.S. President has expanded significantly. 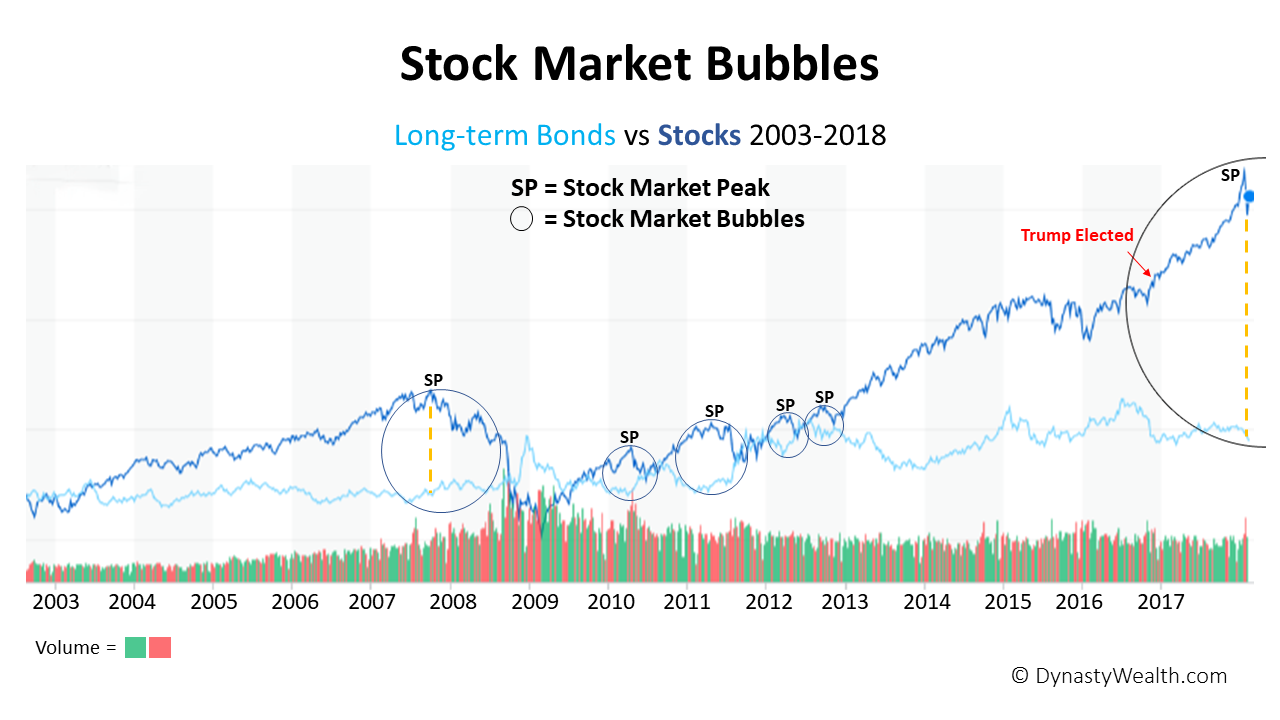 I have been monitoring this bubble since 2016. It was originally discovered from my crash research that I have been conducting since the Bank of Japan (BOJ) instituted a Negative Interest Rate Policy (NIRP) in February 2016. My research enabled me to find the bubble and other historical anomalies or distortions in the capital markets that have been present for the last several years. Watch the video below to view the charts and graphs for the anomalies and distortions which have put the markets on the precipice of a crash.

To insure access to all of my articles, reports and alerts covering the new bear market which was born on January 31, 2018 (see my February 6, article “BULL DEAD, BEAR DOB 01/31/18: Expect Stock Market Decline of at Least 50%”) sign up for the free newsletter at http://www.dynastywealth.com. Additionally, all of my updates including my play by play on the 2018 crash upon its commencing will be sent to the newsletter’s subscribers.

Disclaimer. Mr. Markowski’s predictions are frequently ahead of the curve. The September 2007 predictionsthat appeared in his EquitiesMagazine.com column stated that share-price collapses of the five major brokers, including Lehman and Bear Stearns, were imminent. While accurate, they proved to be premature. For this reason he had to advise readers to get out a second time in his January 2008 column entitled “Brokerages and the Sub-Prime Crash”. His third and final warning to get out, and stay out, occurred in October of 2008 after Lehman had filed for bankruptcy. In that article “The Carnage for Financials Isn’t Over”he reiterated that share prices for Goldman and Morgan Stanley were too high. By the end of November 2008, the share prices of both had fallen by an additional 60% and 70%, respectively — new all-time lows.